Sending blessings to everyone who needs more strength today.

A Man would say to me, “Great spirits often receive violent opposition from mediocre minds.” Which is basically an Albert Einstein quote, said a little differently.

Every challenge I’ve been through with people, that felt crushing to my spirit, made sense when he said that. Suddenly, my sensitive heart was acknowledged.

After I pheonix and rebirth, which is so often my reality, having 5 planets in Scorpio, I create something. That’s how I gain my clarity, strength, and empowerment.

I sat down alone at Erewhon. One of the most craziest nature people from Topanga that I know, sat down when I said hello. His stories are so out there, most people are flabbergasted. I don’t know if I can share the worst one, it’s so crazy! It’s really great to sit and listen to his stories. I awaited his latest tale when he sat down. He told me how he picked up a poisonous, deadly lizard and was so happy because he had been waiting to find that lizard for years! He looks forward to the day when he can hold an anaconda snake. I listened to him, hardly saying many words.

“You seem softer now.” he said. I softly agreed. I feel like more of an Angel Super Hero then yesterday.

This mercury retrograde has been a mix of everything.

I replaced the gorgeous pink stone in my 50 year old necklace that had sadly fallen out, with cats eye stone. A few days later, it was hailing and raining in the morning and life had sadness, I cried puddles. A few hours later, the sun came out, and the next thing I knew, the Angel Warrior and I rode off in my adventure car, with a miraculous rainbow by our side. We drove around the town for an hour while he sang and I danced to India Arie and other songs, alternating my hands, feet, and face out the window in the cool air. 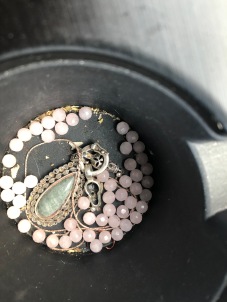 That’s when my favorite necklace fell into pieces all around me. It felt like being in a dream where nothing in the physical reality was a concern. Until it was again, and we both had a sling shot of reality. I knew when I saw the rainbow, that as magical as it was, I’ve been in rainbow moments before. Rainbow moments are incredible and they can be a bit illusionary too. Put some highly sensitive people in a rainbow moment and it can be quite entertaining. We did feel so free in that moment. 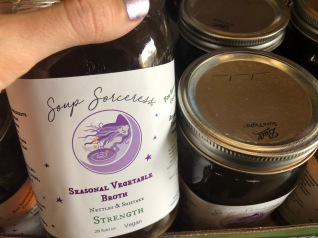 My happiness broth had sold out, and nettles arrived back in season. It was time to bring in the Strength broth to Erewhon. I needed more strength. I felt we could all use more strength through the retrograde. In fact, I’m stronger now then I was when I first created the strength broth. When the Universe created this flavor through me, it was a time where I was growing stronger in being myself.

Out in the World

Yesterday, at barworks class, the Teacher said. “You are stronger then you think.” And left us with a few more words about strength in life on our way out the door.

The Angel Warrior, who is still recovering his strength from the trauma of false accusations, (this is explained in my last post) called and told me that he spent 3 hours walking around town and picking up trash. 3 hours! He’s gaining so much strength inside, that he’s starting to feel the muscles pop out of his arms like a super hero.

Today, my Wizard and I took a hike. We found a car. “That 50 year old car would not be an easy trash pick up”, I thought to myself.

“This is the end of the trail.” my Wizard said, as we stopped at a beautiful oak tree, after having escaped bushes and bushes of poison oak.

I hugged the tree, and slowly caressed it with the lightest fairy touch. “Thank you oak tree. Please give me more strength to be more me. I love you.”

If you’ve never stopped to hug a tree and soak in it’s wisdom, you’re in for a treat when you discover this. I spent a decade in Topanga Canyon and made nature my first priority. It’s the best.

My Wizard tried to tell me a story on the way back, but I was too distracted by looking at my tree picture. “I’m stronger than you are.” he mentioned. He might be right, he’s 12 years wiser.

And so… The theme of the tail end of mercury retrograde is, strength! I am stronger than I was the first time this flavor was created. Everything I’ve created, and am working on, and all the magic and harsh realities I’ve witnessed, is creating more strength in me then ever. I told a new friend at Erewhon, “there’s magic in the beginning of the retrograde, during it, and there will be magic after it.” Even if there was a lot of tough stuff in it. Magic happens. We’ll get through this and come out better. For me it’s another rebirth, and I thank everyone who has been a part of it.

If you love to hike and you like to avoid poison oak, I designed these organic cotton leg warmers for Women. I wear them in dance and yoga classes too! They’re totally cute! I get compliments all the time. The reason I like them on hikes, is that if I brush against poison oak on my calves, it’s easy for me to take these off and wash them separately of everything else, while still keeping my pants on. It’s really great. Even better, is that they look cute. You won’t find this fabric anywhere else, because it’s an original print. Check them out on Etsy!